Organic photovoltaic (OPV) cells are made from organic (carbon-containing) materials instead of silicon, making them lighter and less expensive than conventional silicon solar panels.Gerry is part of the Victorian Organic Solar cell Consortium (VICOSC). The group has already seen great success developing printable thin film solar, which helps make more affordable lighting and power available to developing countries. Spray- on solar takes this to a new level. Gerry says the key difference between printable and spray-on solar films is the way they’re manufactured. 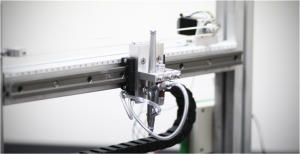 “This opens up the use of a broader range of less soluble materials and it cuts the use of the harmful solvents. Plus, the spraying process allows you to build in a charge gradient—to make a more efficient cell.”

“To print OPVs, you have to make concentrated solutions to produce a strongly absorbing but thin film. Unfortunately, many of these materials are sparingly soluble, so we use [toxic] organic solvents, like dichlorobenzene,” Gerry says, “With spray on-solar you don’t need concentrated solutions—you just spray longer with a normal solvent.

Story written for Science in Public as part of Stories of Australian Science 2012.

© Tanya Ha, 2017. Unauthorised use and/or duplication of this material without express and written permission from this site’s author and/or owner is strictly prohibited. Excerpts and links may be used, provided that full and clear credit is given to Tanya Ha and/or tanyaha.com with appropriate and specific direction to the original content.